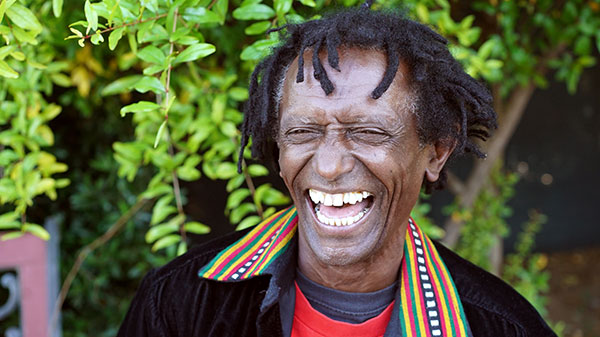 Background
Alula was born in a small village in Ethiopia called Alemaya which means: “a place where you can see the world.” Alula’s mother was Jewish and his father was Christian. Tzadik was taken at birth from his mother because of her religion and did not know he was Jewish for the longest time. Alula was teased by kids and elders at the Christian orphanage. But Tzadik never forgot his mother. He found her, and lived with her learning Hebrew songs and prayers.
Alula’s music is an expression of the many disparate strands of his life. His songs have Hebrew, Amharic, Latin and German musical influences overlaid by American hip-hop and reggae. He speaks eight languages and sings in over ten. Alula also plays twelve musical instruments including the piano, guitar, bass, drums, harmonica and kirrar, a harp-like instrument that dates back to the time of King David.

Alula became a pop star sensation in Ethiopia in the mid-’80s with the hit song “Sentahehu,” named after his original Jewish first name, and the name of his son. After his song hit big, Tzadik landed in prison for a year for playing a song at his concerts called “Mr. President,” which was taken to be a protest against Communist dictator Mengistu. Tzadik went free in 1991, when the Communist government was overthrown in a coup d’état.

Fearing that he would be jailed again, Alula left Ethiopia by foot to Sudan, then continued to Egypt and flew to Washington, D.C. He lived in New York and in Berkeley before coming to Los Angeles.

Alula says his transition to life in this country was quite easy. While he had no trouble fitting into American society as a Jew, it was a little different for him as an African.

Alula continues to write songs and even scored “God and Allah Need to Talk,” an interfaith-themed movie. He shows his gratitude for the freedom he enjoys as an American Jew with a monthly mitzvah, performing for Jewish inmates and recovering alcoholics. He also loves playing on the Third Street Promenade in Santa Monica.

What is it like to be part of the Nashuva service?
I feel like a member of a family. It is my first time to ever pray Jewish music in a Christian home. Nashuva is musical, spiritual, fun. It brings me so much joy and when I look out I see joy and smiles in the faces of everyone in the congregation. That makes me feel good.

I love working with Rabbi Naomi Levy. She is a powerful Rabbi, very kind and patient. I love seeing the beautiful kids at Nashuva.

What is it like to be part of the Nashuva band?
The musicians are like family and friends. They are really good musicians whom I respect. Playing with different musicians is also a way of learning. Nashuva has its own musical style—a lot of rhythm, a lot of improvisation. It’s all accessible and easy for people to follow, hum and sing.
The prayers stay in your ears. They stay with you on your way home. Nashuva’s music stays in the ears and in the heart.

What do you hope for Nashuva?
I hope that it grows and that more and more people will understand the meaning of what we are doing and keep on coming. I hope that it will grow and those who come will bring other people.